MORGAN Tsvangirai is perhaps the best and well known opposition leader in the country.  It is because of his bravado that saw the country’s opposition MDC gaining majority support and winning the majority of seats in parliament for the first time since independence.

The country is now facing a bleak future with no prospects of Zanu-PF turning around the economy. Tsvangirai has said he is the answer to the country’s economic woes. However, I am one of those who feel that the man from Buhera, Tsvangirai is not longer a solution. He is the same man who blundered while visiting German Chancellor, Angela Merkel.

As the Prime Minister of the country, his blunders surprised all and sundry and his reputation was ruined. If he failed to do basic things, standing behind his country’s flag, can he then be able to deal with the big task of reviving the economy?

The video is a clear description of Morgan Tsvangirai, he is a leader who will always be told what to do, he is a person who can not make a decision on his won. Therefore, how can he be able to serve  Zimbabwe’s economy which is nose diving. I guess there are better people who can serve the economy not him.

Biti and Tsvangirai in a marriage of inconvenience

THE troubled MDC-T recently claimed that the party has closed ranks, as the party in now focusing on rebuilding in preparation of the 2018 harmonised elections.

After almost a month of internal squabbles which was torched by the suspension of the party deputy treasury general, Elton Mangoma I was still waiting to see how the battle was going to end.

The party sympthisers, of which am not one of them are happy about the development which they believe is going to defeat team Zanu-PF come 2018 elections.

Biti categorically told journalists at his press conference that the suspension of Mangoma was null void. Mangoma is still suspended hence nothing has changed as far as Biti’s position regarding the suspension as a non event.

The pundit can therefore ask, after Biti joined hands or forces with Tsvangirai, is Mangoma’s suspension now a justified move?

It is understood that Biti and Mangoma including most whites want Tsvangirai to step down as the party leader. The camp is believed to be led by Biti.

The camp, which Biti is said to be leading is said to be financial powerful, as it has some faces that can get money from donors. Some of these individuals are the former Treasurer General, Roy Bennet. Bennet was the first white person in the party to call for resignation of Tsvangirai citing poor leadership qualities as the reason why the party lost dismally in the 31 July elections.

What Biti and Tsvangirai did is a true picture of what a “marriage of inconvenience” is like.

ber. It is said that Nelson Chamisa the party organising secretary is eye the post and hence Biti might be afraid that if he continues to be radical, Tsvangirai’s blue eyed boys can plot his downfall.

At the moment, there is no logic on what made Tsvangirai and Biti to close ranks . Of all the issues that Biti was clamoring about, none of them have been resolved. So it bangs the mind to ask what is that made Biti “rejoin” some of his members.

Surely, this is a mere marriage of inconvenience.

WHERE are we heading to? What is going on? Why should we continue to suffer? These are some of the questions people might be asking concerning the state of economy in the country.

During the inclusive government, the economy was slowly growing and the people are not wondering much as they are now. What is disturbing is that those who are in power also seem to be arrogant and clueless and I wonder where we are heading to.

The MDC can now be vindicated because it highlighted that the turnaround in the economy was due to their presence in the government.

During the inclusive government, despite having failed to score many points due to some blunders, the economy was at least showing signs of improvement.

What then boggles the mind is what is that Zanu-PF is going to do to serve the economy which is nose diving? Where are they going to get money to rebrand Zimbabwe? Perhaps we must be patient, but the truth is that people are now becoming inpatient.

The problem I think is that, we have set a bad precedence by giving lawyers room to run the economy. Who said the minister of finance should be lawyers. Why can’t give economy to economics and let them do what they know is best. The important matter now is that Mugabe must reshuffle his cabinet and give some who know how to steer the economy. There are many people who can better fill the Finance Minister’s post. Technocrats will also be useful.

People including myself, have lost faith in the way Chinamasa is handling the economy. We do not want the I don’t care attitude because people are the one who are suffering not. He is enjoying the luxury of a Range Rover and pocketing thousand of dollar yet the majority is earning money which is below the poverty datum line.

With the way the situation is on the ground, I now support those who said Zanu-PF on their own cannot do something meaningful.

The make matters worse, the President has remained mum and shockingly indicate that civil servants will get back dated pay in April. Zanu-PF must admit that they have to fulfill the promises they made during the 31 July election campaigns.

The current state of the economy has also exposed Zanu-PF. This has shown that the party can no longer be trusted and they should not be given another mandate to lead the country.

For how long shall we continue to seethe and yearn for a better Zimbabwe? Zanu-PF should at least consider that citizens are truly suffering, already millions are outside the country trying to make a leaving. They say home is always the best but with the way things are, the opposite is true.

It was not so long when the family housed at 44 Harvest House Nelson Mandela Avenue & Angwa Street in Harare grabbed our attention. That is the home, headquarters, of the biggest opposition political party in the country, Movement for Democratic Change (MDC-T) led by the former Prime Minister Morgan Tsvangirai “soiled” itself by sacrificing its troubles to the thirst, hungry news vampire- the media.

It boggles the mind to find out that some within the institution which claims to be democratic is suspended for airing his views. Why is Elton Mangoma suspended? Didn’t Bennet pass the same message, what about Eddie Cross, why they didn’t suspend Kay? 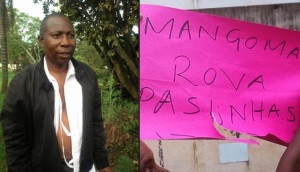 Besides that, what is it that Tsvangirai wants to do for the following two years when he is already tearing the party apart? Truly, Mangoma was well spotted after such a defeat, the party had to start afresh with new ideas and work in harmony, waiting for 2016 is very suicidal because what will they achieve within two years to run up of the elections in 2018 to regaining their lost popularity.

It is crystal clear that Tsvangirai wants to stand again as the MDC-T candidate in 2018 where when things move the way they are at the moment he is going face more embarrassment, as the 2013 elections were just a “teaser.”What guts do Tsvangirai have to call Mugabe a dictator and power hungry when he too cannot listen to voices of those opposing him?

Thank God Tsvangirai lost the 2013 presidential election, whether they were rigged or it was a free and fair, this man was going to be a disaster. Certainly, he was going stay in power and we were going to have another long serving president, perhaps he was going to amend the constitution for a one party state.

Professor Welshman  Ncube has been telling people that Tsvangirai is violent but some thought it was a political talk but with the recent skirmishes, Prof Ncube is vindicated.

Surely, the MDC-T must decisively deal with violence if they want to be voted into power. A normal person not can vote for someone who is violent into power because that person might use the armed forced to gun him down. Opposition parties must challenge the sitting Government, but how are they going to challenge them when their housed is on fire.

Tsvangirai must humble himself and pass the button and serve his legacy while it still exists otherwise he will too be one of the worst dictators in the World.